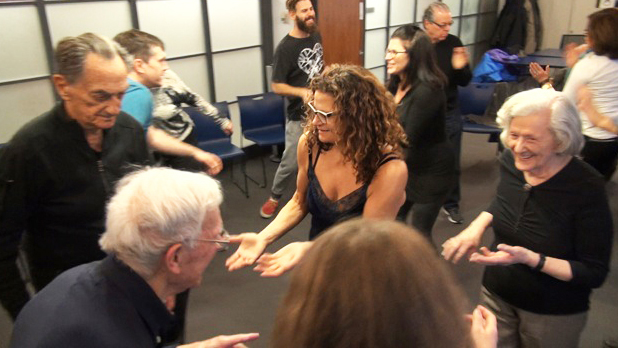 The first time I walked in to lead the Dancing with Dementia group, I was vetted by one of its “founding elders.” “Are you one of us or one of them?” he asked. I responded with an enthusiastic “YES!”

Having the privilege of sharing the 5Rhythms® with people diagnosed with Alzheimer’s disease continues to be the highlight of my week. They are my true and fiercest spiritual teachers of Presence with a capital P, and constantly remind me to drop my ego characters, get over myself, and enjoy the potential and love in every moment.

Dancing with Dementia was started seven years ago by Peter Fodera at the Stein Senior Center in New York City. With Jason Goodman and me enthusiastically co-leading it, the class has continued to flourish. The group consists of approximately 20 people, who joined while in the early stages of the disease. After seven years, the majority of them are still in its earlier stages, which is a testament to the efficacy of 5R. Of course, some people have progressed and died, but the group is still a constant inspiration for witnessing the grace and humor with which one can face daunting end-of-life obstacles.

As a group of people who might be feeling isolated and distant, they have formed an amazing bond with each other, and with me. We have a space in which people can move freely with their celebrations and their depressions. Sometimes it feels more like a wacky junior high school, with lots of jokes and teasing, or a kindergarten of wild animals. They are humorous, and kind to each other—pointing out when someone is not moving or needs more encouragement, or offering an invitation to partner.

Every week we do a unity circle with passing repetitions (leading and following). They support each other and are patient as each person finds their unique gesture to contribute. Often at the end of class, during the closing, one or another will speak about the power of the heart and the importance of connection. How beautiful to have this energetic, visceral connection through movement even as the linear mind is slipping away.

Because in many ways it’s a class on Chaos, there are often hysterically funny moments. One time, when I was leading for the third week in a row, a woman said to me, “Oh my god, you’re so much better than that one we had last week” (who, of course, was also me!).

One of our favorite gentlemen is in his mid-nineties and was able to attend until quite recently. He was always the philosopher, who summed up each class with “all that matters is we have each other.” He was also a former dentist, who would beam ear to ear and proudly point out his erection from dancing with one of the gorgeous caregivers. And would sing Moon River whenever he felt like it. One time I played Waltz of the Flowers from The Nutcracker, and he said rapturously, “Oh, this is so wonderful; I can fly again!”

The children’s book author, Bob, taught me the terrific nonsense song Chickery Chick, first sung by Sammy Davis, Jr. in 1945. In spite of its tongue-twisting lyrics, most of the group can now sing it forward and backward. One of Bob’s books has been made into a screenplay, with the title role played by Robert DeNiro. Bob brings to the group a huge heart and a quick and facile sense of humor, even while he often can’t recall recent details.

And then there’s the beautiful former psychiatrist, famous for her textbooks, who is now 96 and still moves with grace and joy. She lights up the room with her smile. Each dancer brings to the group their own unique offering.

In the progression of the disease there is, of course, the unwinding of structural thinking. As the brain function becomes more fragmented, it seems as though the soul essence is able to shine through more brightly. There is no fading of connection and love, which are among the most basic needs for creating meaning. It is always touching to witness how lovingly and gently the dancers treat each other.

While the group doesn’t know what a line is anymore and, in fact, are no longer capable of forming one, we work with gratitude with all that we still have left. And we can always hold hands and make a perfect circle.